Apache Airflow Sensors are a special kind of operator that are designed to wait for something to happen. When sensors run, they check to see if a certain condition is met before they are marked successful and let their downstream tasks execute. When used properly, they can be a great tool for making your DAGs more event driven.

In this guide, we'll cover the basics of using sensors in Airflow, best practices for implementing sensors in production, and new sensor-related features in Airflow 2 like smart sensors and deferrable operators. For more in-depth guidance on these topics, check out our Mastering Sensors webinar.

All sensors inherit from the BaseSensorOperator and have the following parameters:

Beyond these parameters, different types of sensors have different implementation details. Below we describe some of the most commonly used sensors and how to implement them.

Many Airflow provider packages contain sensors that wait for various criteria in different source systems. There are too many to cover all of them here, but below are some of the most basic and commonly used sensors that we think everybody should know about:

To browse and search all of the available sensors in Airflow, visit the Astronomer Registry, the discovery and distribution hub for Apache Airflow integrations created to aggregate and curate the best bits of the ecosystem.

To show how you might implement a DAG using the SqlSensor, consider the following code:

This DAG is waiting for data to be available in a Postgres database before running validation and storing tasks. In general, the SqlSensor runs a SQL query and is marked successful when that query returns data: specifically, when the result is not in the set (0, '0', '', None). The SqlSensor task in this example (waiting_for_partner) runs the CHECK_PARTNER.sql script every 20 seconds (the poke_interval) until the data is returned. The mode is set to reschedule, meaning between each 20 second interval the task will not take a worker slot. The timeout is set to 5 minutes, so if the data hasn't arrived by that time, the task fails. Once the SqlSensor criteria is met, the DAG moves on to the downstream tasks. You can find the full code for this example in this repo.

Sensors are easy to implement, but there are a few things to keep in mind when using them to ensure you are getting the best possible Airflow experience. The following tips will help you avoid any performance issues when using sensors:

Smart sensors are a relatively new feature released with Airflow 2.0, where sensors are executed in batches using a centralized process. This eliminates a major drawback of classic sensors, which use one process per sensor and therefore can consume considerable resources at scale for longer running tasks. With smart sensors, sensors in your DAGs are registered to the metadata database, and then a separate DAG fetches those sensors and manages processing them. 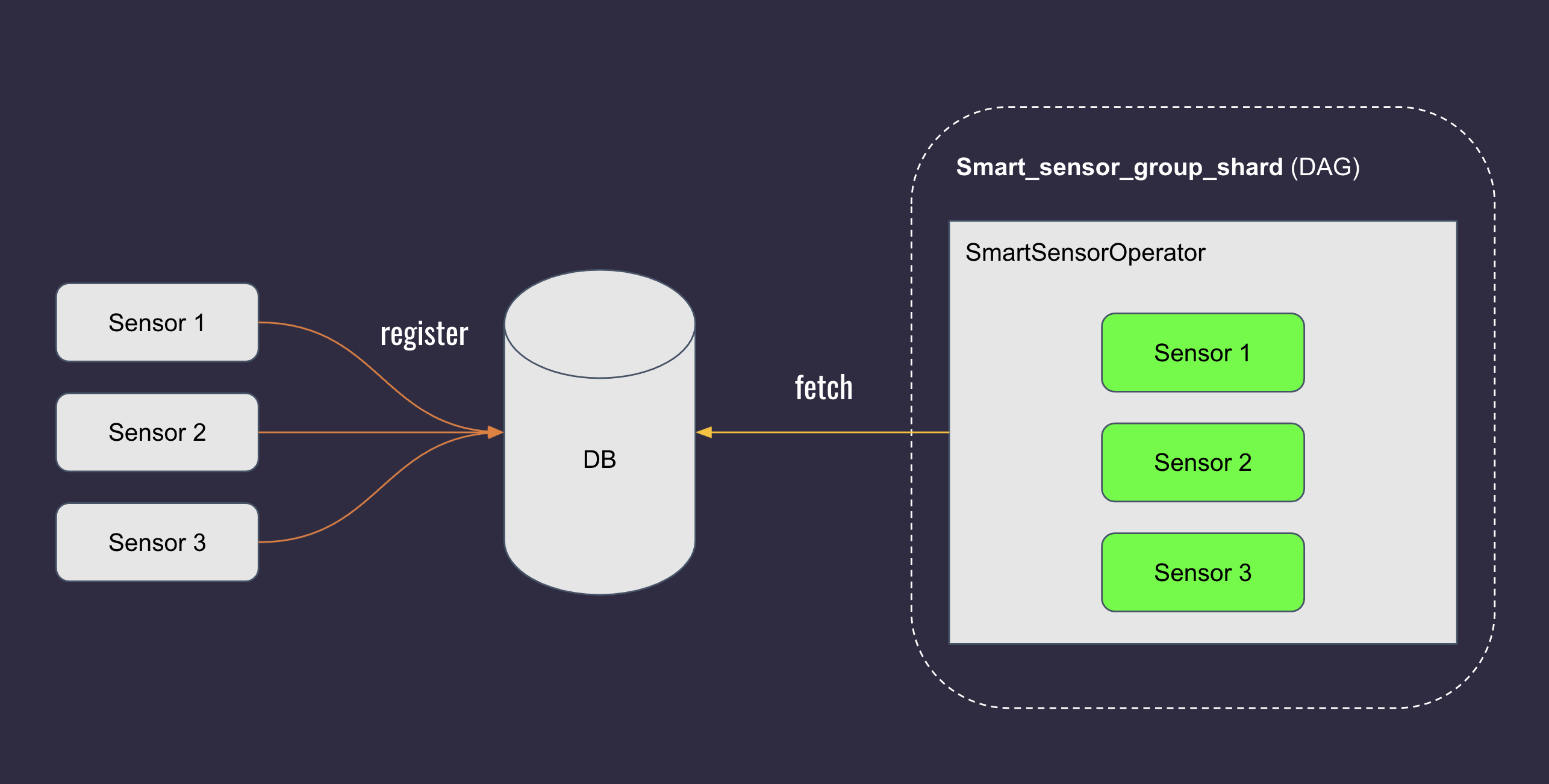 Note that smart sensors are considered a beta feature, and so they might be changed in future versions of Airflow. They are somewhat complex to implement, and not very widely used to-date. They are also generally less preferable to deferrable operators (more on these in the section below), which are more flexible. For these reasons, we recommend using smart sensors only to advanced Airflow users who are running many sensors.

Deferrable operators (sometimes referred to as asynchronous operators) were released with Airflow 2.2 and were designed to eliminate the problem of any operator or sensor taking up a full worker slot for the entire time they are running. In other words, they solve the same problems as smart sensors, but for a much wider range of use cases.

For DAG authors, using built-in deferrable operators is no different from using regular operators (i.e. using them is much simpler than implementing smart sensors). You just need to ensure you have a triggerer process running in addition to your Scheduler. Currently, the DateTimeSensorAsync and TimeDeltaSensorAsync sensors are available out of the box in OSS Airflow. More deferrable operators will likely be released in future Airflow versions. For more on writing your own deferrable operators, check out the Apache Airflow documentation.